The Pravda
The Pravda was the Russian newspaper established 1912. It started off as a daily newspaper, but it eventually became the means for propaganda under the name of the Bolsheviks. (Brittanica, 2013) When Stalin was in power, he kept a tight leash under the newspaper, only allowing things that he wanted to get out into it, making it propaganda for himself and destructive material for his enemies. He changed the events of the Russian Revolution, making him appear to have a more iconic role than he really did.

Connection to Animal Farm:
Squealer in Animal Farm is similar to the 'Pravda' in the Russian Revolution.

Because the people of the Russian Revolution would automatically rebel if they saw Stalin's open views, Stalin hid behind a wall of propaganda, specifically the Pravda, or russian newspaper. (Brittanica, n.d.) Stalin twisted the newspaper in the way that whatever came out was what Stalin wanted. This included lies about statistics and false hope of a brighter future. Napoleon had a similar program as well, but instead of the newspaper he had Squealer, who would tell lies to people, making them think their lives were being improved.

Squealer also had a way of manipulation and cunning use of persuasive language that would get the animals to listen. On page 54 of Animal Farm, Squealer says "'Surely you remember that, comrades?' exclaimed Squealer, frisking from side to side." (Orwell G, 1989) Squealer has many other instances in the book where peculiar actions and movements make him more convincing to the animals. 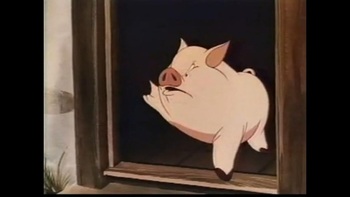 Orwell represented the Prava as a pig named Squealer because he wanted to show how slippery it can be. 'Squealing' is the word for communication of pigs. This is what Squealer is, he is the spokesman for the pigs, deceiving the other animals to work hard for him. Squealer was put into the book to show the power that propaganda has and how manipulative they can be to the population.
Back to Top
Powered by